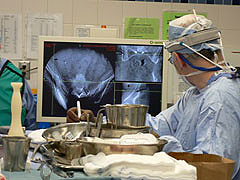 A giant donut-shaped machine that takes three-D images is now being put to use in operating rooms at University Hospitals in Iowa City, one of fewer than two-dozen hospitals in the world to have such an item. The half-million dollar device is an advanced imaging system called an O-arm. Dr. Timothy Ryken, a U-of-I neurosurgeon, says the machine is dramatically changing how he operates on patients’ spines.

Ryken says: "We can get our post-operative imaging immediately and adjust our techniques in the operating room as we go, as opposed to finishing the procedure, go down and get a complex C-T or M-R-I scan, and then if we’re not happy with what we’re seeing, we’d have to return back to the operating room." Ryken says the big O-shaped device can be brought down onto a patient’s body to shoot a series of three-D images during surgery.

Ryken says, "The imaging system runs around a track inside and takes multiple pictures over a very quick period of time, about 13 to 15 seconds, then reconstructs all that series of pictures back into a three-dimensional image as opposed to just a one-dimensional flat X-ray, which is what we’re used to looking at." The O-arm was first used during surgery in late April and Ryken says it worked flawlessly. He says the device cost more than $500,000, a big investment for the U-of-I.

Ryken says: "It certainly is a lot of money but when we look at the improvement in having to go back and repeat surgeries, it doesn’t take very long before that advantage becomes quite apparent. To balance that, a C-T scanner that might take the same kind of position, an inter-operative C-T scanner would be several million, at least." The O-arm system is the first to be used in Iowa and is one of only 22 such systems in use worldwide.