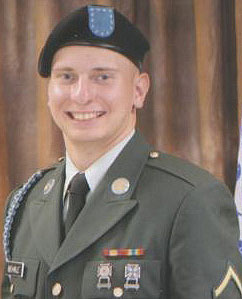 The Department of Defense has provided a few more details about the death of an army soldier from Iowa in Iraq. Twenty-year old Specialist David Buehrle  was killed on Saturday when an improvised explosive device detonated near his Bradley Fighting Vehicle.

“The blast was very significant, it killed six soldiers that were in that vehicle”, says Lieutenant Colonel Greg Hapgood with the Iowa National Guard. Hapgood says the soldiers were in a dangerous area near Baghdad.

“From the information we have it appears they were on some type of combat patrol, which is a very common mission,” Hapgood adds, “everyday soldiers are going out facing some very grave dangers, and this happened to be a day Specialist Buehrle was on a combat mission”.

Buehrle is a 2005 graduate of Tipton High School. Funeral arrangements are pending at Fry Funeral Home in Tipton.