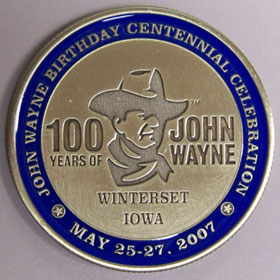 Winterset rolls out the red carpet this weekend to celebrate the centennial of John Wayne’s birthday.

The legendary movie star was born Marion Morrison in the Madison County town on May 26, 1907. Mary Terry is one of the co-chairs of the centennial celebration that begins Friday.

Terry says they anticipate 25,000 people will attend the event through Sunday. Thirty-five members of Wayne’s family, including his two of his kid, their grandchildren and great grandchildren. Events Saturday start with a parade. Wayne became famous making westerns, and the parade will have a Wild West Review theme.

Terry says it will be very much like you’d see around the turn of the century in the 1900’s, with horse riding tricks, a stagecoach, marching bands. At noon they’ll break ground for the new John Wayne museum. Terry says the groundbreaking will be unique, as it’s actually going to be a bulldozing, as a bulldozer driven by Ethan Wayne, John Wayne’s son, will driver the dozer. Other events include symposiums on Wayne’s life.

Those will be at one and four o’clock Saturday and Sunday for people who knew John Wayne or have written books about him. Terry says the hometown theatre on the square will be showing free John Wayne movies to give people a chance to see the movies on the big screen. Many of the events are free, and Terry says there are also "ticketed" events at the fairgrounds, and a concert by Michael Martin Murphy. For a complete schedule of the events check out the John Wayne Birthplace website.