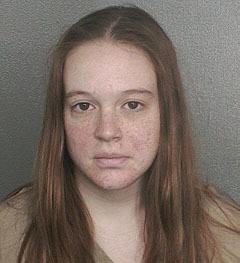 According to the Broward County Sheriff’s department in Florida, Truitt told police she hid her pregnancy from her parents and her boyfriend. They were all staying at a resort in Pompano Beach on Saturday when the newborn’s body was found in a dumpster. Truitt told the cops she gave birth in a bathroom, used a knife to cut the umbilical cord, put the baby in a plastic bag with some soiled towels and threw it all down the trash chute.

A hotel employee found the bloody knife in the seventh-floor hallway and there was a trail of blood to the trash chute. An autopsy concluded the baby was born alive and died of blunt force trauma to the head from being dropped down the trash chute. This past December, Truitt was allowed to graduate early from Solon High School.

Bob Lesan is the high school principal. "She was quiet, came to school, just did what she needed to do and then left," Lesan says. "She wasn’t involved in much here." According to Lesan, the faculty and teachers are the school are "in shock." School in Solon is out for the summer. Lesan is in the process of getting his "crisis team" together so students who may wish to talk with a counselor about the incident will be able to do so.