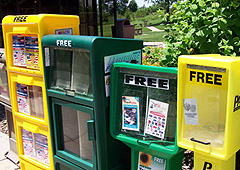 A free magazine is raising some questions at Iowa’s 40 full-service rest areas. The “Iowa Nights” magazine promotes strip clubs around the state and features some explicit sexual images. Iowa rest area administrator Steve McMenamin is getting a few complaints. He says about 1,000 calls are made every year to a toll free comment line.

Mcmenamin says most of the calls are compliments about the facilities, but some are from people upset about the free publications. McMenamin says it’s difficult to ban certain magazines. “There are first amendment rights which allow distribution of material,” McMenamin says, “and we had our legal department review this publication and it was not deemed to be pornographic, and we didn’t feel we could prohibit it.”

McMenamin says he doesn’t believe the magazine is appropriate for rest areas, but legally, it can’t be banned. McMenamin says, “Our image is important and we’re trying to the right thing with those buildings and leave a good impression with the traveler because the rest area may be the only stop they make in Iowa.” He says it’s possible the state could completely ban magazine stands from rest areas.