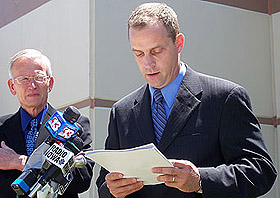 Authorities say the man who was shot dead by a police officer in south central Iowa Tursday had fired at the officer twice. Osceola Police Chief Marty Duffy says the man that was killed is 40 year old Eric Harold Lockwood of Osceola.

The officers involved in the shooting are both on administrative leave. They are identified as Officer Richard Thomas and Sergeant Chuck Beeker. Iowa DCI Special Agent Kevin Winker says the incident started with a 911 call just after one p.m., with the caller stating that Lockwood fired a shot into an apartment.  (photo above shows L-R: Clarke County Attorney Ron Wheeler, DCI Agent Kevin Winker)

Winker says as Thomas got out of his squad car, Lockwood fired a .357 handgun at him, striking the car. The two men then exchange fire, with Officer Thomas firing three times, striking Lockwood twice. Sergeant Chuck Beeker witnessed the incident.

Winker says the case will eventually go before a grand jury. "We are exploring Lockwood’s past," Winker says, "and any of that information, if relevant, will be turned over to the county attorney and presented to the grand jury." Winker says the gun Lockwood had in his possession was reported stolen from the apartment complex where he lived.