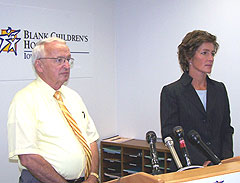 Mari Culver says leaving a newborn infant at a hospital should always be a new mother’s last resort. "Of course, in an ideal world, we wouldn’t have parents who find themselves in this position," Culver says. "However, as a measure of last resort, the safe haven law ensures that there are no legal repercussions for anyone who hands over an infant up to the age of 14 days old to any health care facility."

This is the first time Iowa has launched a "safe haven" marketing campaign. Culver says eight lives have been saved since the law was enacted in 2001, "and I’m certain even more tragedies can be prevented with more publicity of the law."

Iowa Department of Human Services Director Kevin Concannon says the law has worked as planned. "As these videos point out, often people are in a crisis," Concannon says. "They don’t need a complex, complicated answer. There’s a pretty straight, simple answer here – bring that child to a hospital."

The $55,000 ad campaign is being paid for with a combination of state and federal dollars. The Iowa Hospital Association purchased the rights to the ads, which were originally developed for the State of Utah.