You are here: Home / Iowa DOT issues warning about "mini-trucks" 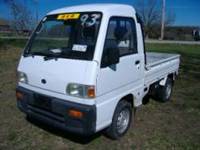 State officials have issued a warning to Iowans who own or plan to buy a foreign-made mini-truck. You’ll get a ticket if you’re caught driving a mini-truck on a public road or street in Iowa.

Andrew Lewis of the Iowa DOT’s office of vehicle services says his agency has fielded calls from Iowans about these minitruck and DOT officials issued a statement to drive home the message that mini-trucks may only be used as off-road vehicles.

County treasurers should not be issuing licenses to these mini-trucks, according to Lewis.

Mini-trucks, which are also called mini-cabs, are similar in size to a golf cart. Used mini-trucks are currently being imported from Japan and were made by familiar companies like Honda, Suzuki, Mitsubishi, and Subaru.

DOT officials say the vehicles are not "road-worthy." Lewis says a "federal certification label" is affixed to vehicles that conform to all federal safety and emission standards and mini-trucks don’t have them, "because they’re not built for road use in the U.S."

Recent changes in U.S. import rules allow mini-trucks to be shipped into the country if the vehicles’ engines are rigged to keep their speed at or below 25 miles per hour. But they still can’t go on public roads.

Lewis says he doesn’t know how many mini-trucks may be in Iowa and he’s not heard of any on-road accidents involving mini-trucks.