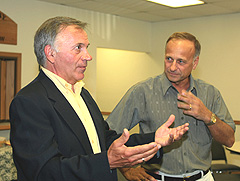 Steve King’s "Homecoming" is an annual event, held in Odebolt, and this past Saturday night 175 Republicans gathered there for a bit of pork and a taste of what Kansas Senator Sam Brownback and Colorado Congressman Tom Tancredo offer as candidates.

Brownback, who is from water-logged Kansas, joked that Kansans want to send rain Iowa’s way. "I made a promise to a couple of tables that you’ll have a rain within 24 hours," Brownback said, to laughter. "Now, hear me through because I like to go back to the farm once in a while and help dad out, but if it’s too wet he doesn’t let me to come because I normally bring rain…If it rains within 24 hours, I want every one of your votes for the Straw Poll August 11th."

Brownback was wearing a "Relay for Life" t-shirt and told the crowd about his own cancer fight. "I had melanoma in 1995. My dad’s had colon cancer," Brownback said. "One of my big pushes running for president is to end deaths by cancer in 10 years and I think we can do it."

Brownback said having cancer deepened his faith. "(The melanoma) was a simple one for me and it was caught early enough. We took it out and everything went on," Brownback said. "But it was a depth of faith journey and if you don’t understand or support faith, you can’t understand America.

Tancredo, second to speak, sent a barb Brownback’s way, criticizing Brownback’s cancer-fighting promise. "I cannot promise you and I will not promise you that as president of the United States I will solve every single problem you have. I will not be able to cure every disease that you have," Tancredo said. "…When you ask so much of the federal government, don’t be surprised when you get so much government."

Tancredo, though, spent most of his time talking about his primary issue — illegal immigration. "To every single person in this room who did anything — who wrote a letter, who sent an email, who picked up a phone and told their U.S. Senate and said ‘Please kill this lousy immigration bill’ — I want to thank you all from the bottom of my heart," Tancredo said, as the audience applauded.

Audience member Ken Uhl of Lawton is a Tancredo backer and wore his Tancredo sticker into an Odebolt convenience store to pay for his gas. The clerk was an Irish immigrant who noticed the sticker, and the two men talked about Tancredo. "As I got done, handed him the check and I says: ‘Do you want to see my driver’s license for an ID?’" Uhl said in recounting the exchange. "He says, ‘No, if you’re supporting that man, I don’t need any ID from you.’"

Tancredo said he runs into legal immigrants all the time, in Iowa and elsewhere. "The people who are doing it the right way, God bless them for it…because they respected our laws," Tancredo said.

Former Arkansas Governor Mike Huckabee had been scheduled to speak at King’s "homecoming" but King told the crowd Huckabee flew back to Little Rock to help his wife deal with a broken water pipe in their home.