You are here: Home / News / Romney rejects Obama option of strikes in Pakistan 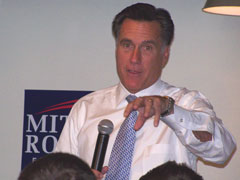 Republican presidential candidate Mitt Romney says the war against Islamic jihadists extends beyond Iraq and Afghanistan, but he balks at the suggestion the U.S. military should launch strikes into Pakistan to strike at terrorists.

"I do not concur in the words of (Democratic presidential hopeful) Barack Obama in a plan to enter an ally of ours…I don’t think those kind of comments help in this effort to draw more friends to our effort," Romney says.

U.S. troops shouldn’t be sent "all over the world," according to Romney, and Romney suggests Obama’s remarks about ordering military strikes inside Pakistan were "ill-timed" and "ill-considered."

"There is a war being waged by terrorists of different types and nature across the world," Romney says. "We want, as a civilized world, to participate with other nations in this civilized effort to help those nations reject the extreme within them."

"What’s ill-considered is Mitt Romney believing we should keep 160,000 American troops in the middle of someone else’s civil war, but not believing we should take out Osama bin Laden if we had him in our sights," Vietor said in a statement emailed to reporters.

Romney made his comments during a brief question and answer session with reporters in Des Moines.  You may listen to his remarks by clicking on the audio link below.