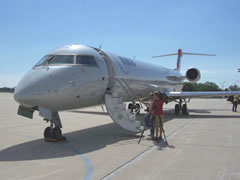 Northwest Airlines announced today it is building a maintenance facility for its regional carrier Mesaba at the Des Moines airport.

Mesaba vice president for technical operations, Bill Poerstel says the operation will service their new CRJ-900 passenger jets. He says facility will be 75,000 square feet, and can hold four of the new airplanes, with shop space and office space. They plan to hold three of the new airplanes overnight in the building and will also be able to do maintenance on the CRJ-200 airplane there.

Poerstel says it’ll take about one year to build at a cost of nearly 12-million dollars. Poerstel says they expect it to be completed sometime next fall and they will hire 30 people. He says there are seven Mesaba technicians on furlough in Iowa that could be called back, and there are 13 on furlough in Cincinnati that will be offered the chance to work in Des Moines.

“This means a great deal to the employees of Mesaba,” Poerstel says, “we’ve really had a rough time and are glad to be part of a growing economy in Des Moines and the State of Iowa.” Northwest bought Mesaba earlier this year. Northwest vice president Tom Bock says the new aircraft upgrades the service offered passengers.

Poerstel isn’t sure if the facility may expand in the future. He says they’ll do everything from changing engines, working on landing gear, to working on the avionics, it’s being built for four aircraft and the shop work. Poerstel says the industry is constantly changing, so “who knows what the future might bring.”

In Iowa, Mesaba serves Waterloo, Des Moines, Sioux City and Cedar Rapids, and provides the only commercial airline service in and out of Mason City and Fort Dodge. The airline also provides a direct flight to Washington, D.C.