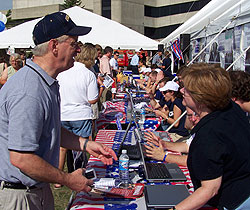 Thousands of Republicans – from Iowa and beyond – strolled the grounds just outside of Iowa State’s basketball arena in Ames Saturday morning as GOP presidential candidates wooed them with food, drink, music and games for the kids in hopes of winning their vote in the Iowa GOP’s Straw Poll..

"The wind is blowing just a little bit. People are out. Everybody’s got a smile on their face," Iowa GOP chair Ray Hoffman said of the crowd.  While many came dressed in shorts and t-shirts on a humid Iowa day, Hoffman was dressed in a suit and tie for televised interviews with national and international media.

"I thought I’d look good for America," Hoffman said of his formal attire.

Candidates shelled out money for tents, but the Romney camp occupied a large open area where the sun was beating down.  That prompted Romneyherd Romney supporters into the shade to wait in a line for voting.

Tammy Morgan of Conesville waited in line to vote for her candidate, Mitt Romney. "I’ve been to some of his meetings and I just like what he has to say better," she said.

The Brownback camp, meanwhile, had a row of laptops in use as supporters checked in before going inside Brownback’s air conditioned tent.

"We need to uphold the second amendment and we’re pro-life and pro-family and he’s consistently voted on those things in his career and hasn’t flip-flopped," Tim Leister of Gilbert said of Brownback.  "That’s what I like about him. He’s consistent."

While many candidates drew supporters from elsewhere, one had to show a photo ID to prove Iowa residency in order to cast a Straw Poll ballot.
That didn’t stop some Wisconsin friends of Tommy Thompson from making the trek to Ames.

"This is democracy. This is how it’s supposed to be. We’ve never been to one of these before. It kind of gives me goose bumps," said Scott Neitzel of Madison, Wisconsin.

Don Tresemer of Council Bluffs was in Ames to vote for Mike Huckabee. "I like his stance on immigration, on energy and taxes, so I think he’s a good man."

Dave Fischer of Des Moines voted for Steve Forbes at the 1999 Straw Poll. This morning, he was holding up a four-by-eight-foot Ron Paul sign on Saturday morning. "I’m a life-long Republican, a life-long Iowan. I’ve never been more enthused about a candidate, any candidate in my life," he said of Dr. Paul.

Linda Derks, a Tancredo supporter, drove to Ames from Dubuque this morning. "My main concern is illegal aliens and he’s been on that subject for several, several years rather than a Johnny-come-lately, seeing which way the wind’s blowing," Derks said.

Cheryl Kramer of Dubuque was in Ames to shop for a candidate in the sort of State Fair atmosphere. "That’s what makes this fun," she said.

Three candidates — Fred Thompson, Rudy Giuliani and John McCain — did not participate in Saturday’s event.  State Senator Jeff Angelo of Creston, Iowa, is a supporter of Rudy Giuliani – was there to take in the atmosphere.

"I’m free and unencumbered today, looking at the ferris wheel and the live performances and the barbeque," Angelo said.  "…I’m amazed by it all."

The Straw Poll results were to be announced at 7 p.m. Iowa time, but one of the 18 voting machines used to tabulate the Straw Poll ballots broke.  Party officials had to count the roughly 1500 ballots cast in that machine by hand.