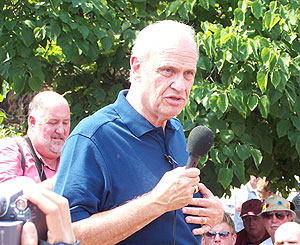 Former Tennessee Senator Fred Thompson is asking Iowans to "keep your powder dry" and give him a chance to be their pick for president.

Thompson plans to formally declare himself a candidate for the Republican Party’s presidential nomination in "a couple of weeks." Today, Thompson visited the Iowa State Fair and gave a speech at the Des Moines Register’s "Soapbox."

"I think the American people are going to give us a shot. I think they’re going to open the door and open their hearts and their minds to what we have to say and to who we are," Thompson said. "I’ve been around, in and out of public service and private life, for a long time now and I hope that people kind of have a sense of the kind of fella I am and the kinds of things that I would like to do."

Thompson recited his resume for fairgoers. He went heavy on his jobs in government and only glossed over his television and movie career. Thompson also brushed aside the idea his candidacy is being hatched too late in the game.

"I look at my history books. I see where people announce September, October, November and things like that," Thompson said. "I know the rules of the game have changed by all of the Washington Beltway pundits and all of the politicians, but I wasn’t there when they made those rules so I’m not abidin’ by ’em. We’ve got plenty of time."

Thompson blasted the acrimony in congress from both sides of the partisan divide and said it was time to fix the finances of the federal government.

"And I don’t apologize for the United States of America. This country has shed more blood for the freedom of other people than all of the other nations in the history of the world combined and I’m tired of people feeling like they’ve got to apologize for America," Thompson said, to loud applause.

Thompson’s final appeal harkened back to his opening declaration that Americans would give him a shot as a candidacy for the presidency. "Keep your powder dry. I think we can do something good for America," Thompson told the crowd at the State Fair.

You may listen to Thompson’s speech at the State Fair by clicking on the audio link below.