You are here: Home / Weather / State hits record August rainfall with one week to go 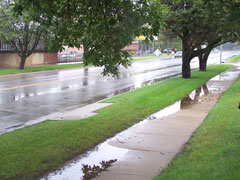 Heavy rainfall that fell across Iowa overnight and into the morning has led to a new August record for precipitation.

State Climatologist Harry Hillaker says Iowa has averaged 8.62 inches of rain this month as of 7 o’clock this morning. The previous record for August was 8.24 inches, set in 1993.

Hillaker says the state’s official weather reporting site at Lake Rathbun measured 12.34 inches of rainfall for the 24 hours ending at 7 o’clock this morning – the fifth highest one-day total ever reported in the state. The all-time record for rainfall in any month is 10.5 inches set in July of 1993.

The State’s Emergency Management Director says the flood fighting effort has shifted from the northern to the southern part of Iowa. David Miller says the concern is the damage to primary and secondary roads and bridges from the quick rush of flood waters.

"It’s a little different than a slow rise and fall, which at least you’re not washing things out, they just settle back down," Miller says, "but in this swift water, it has some ability to cause some scouring and undermine some of the structures – and that’s what we begin to worry about."