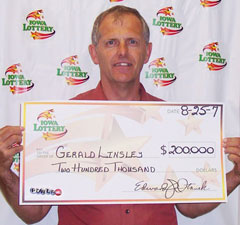 The Deputy Fire Marshal in Sioux City has claimed a $200,000 prize won in Saturday’s Powerball drawing. Fifty-eight year old Gerald Linsley says he usually only checks his tickets once every six months. He decided to check his numbers after a secretary at work told him a winning ticket was purchased at the convenience store where Linsley bought his ticket.

Linsley recalled his reaction when he realized he matched the first five numbers, but missed the Powerball, "Oh my God!" He immediately called his wife, Barb. "I called my wife up," Linsley says, "and I said ‘guess what? Hell froze over.’" Linsley says he plans to pay off his home mortgage, "and then after that, I’m not sure. I’ll probably hold on to some of it for a while." A ticket sold in Indiana won the $314.3 million dollar jackpot, the fourth largest prize in the history of the game.