You are here: Home / Crime / Courts / Large excavator stolen from I-235 construction site 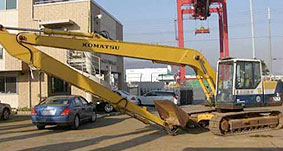 A large and costly piece of construction equipment has vanished from the heart of Des Moines.

Investigators say the Komatsu excavator and a trailer were stolen from the Interstate 235 work site during the last week of September. The excavator is a huge yellow crane on treads with a blue-and-white cab and it’s used for digging trenches and moving dirt.

Chief Deputy Neil Shultz, at the Polk County Sheriff’s office, says it’s not like hot-wiring a car: "This is a major piece of construction equipment. It’s gonna’ take some unique skills and talents to know how to start it, how to operate it, how to load it up onto a trailer. It’s a very expensive item." It’s not the sort of thing you could hide in your garage and Chief Shultz is hoping someone’s seen it though he says the excavator may’ve already been hauled out of state.

Shultz says: "If someone saw this large piece of equipment being moved, the theft occurred sometime between the 24th and 28th of September. Very probably, it was in the evening hours or early morning hours, if somebody saw anyone moving it, saw it being loaded, maybe at the time, they wouldn’t have thought it was unusual." He says the excavator and trailer belonged to private construction firms and are valued at $195,000.

"We’re not sure at this point if it’s still in the metro area, if it’s still in the state or if it’s been taken out. We just don’t know, " Schultz says, "it’s extremely expensive, something readily used on a variety of construction sites of a large scale. We’re going to do everything we can to find it and the people that were involved in stealing it."