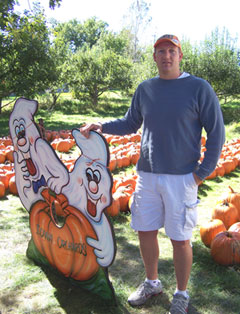 Iowans shouldn’t have any problem finding plenty of plump, orange pumpkins to display on their front step this fall.

Bryan Etchen runs the Iowa Orchard in the Des Moines suburb of Urbandale. He says the weather has been perfect for harvesting a good batch of pumpkins.

"The pumpkins are huge," Etchen says, "they’ve had a lot of rain up in northern Iowa where my (pumpkins) are grown." Etchen buys his pumpkins from Scuffham Gardens in Algona, and sells them at the Iowa Orchard for 30-cents a pound. Most of his larger pumpkins weigh between 15 and 20 pounds. Etchen says maintaining a healthy pumpkin crop involves pulling a lot of weeds early in the growing season.

"If you’re not managing the weeds early on, you can forget it," Etchen says, "(the pumpkins) will just get overwhelmed." Hoeing weeds may be a lot of work, but Etchen says it’s much easier than harvest time.

Pumpkins are botanically classified as a fruit, but are generally regarded as a vegetable. According to most sources, the tradition of carving pumpkins into lanterns at Halloween was a custom brought to America by Irish immigrants.