You are here: Home / Human Interest / Former All Saints church may become a community center 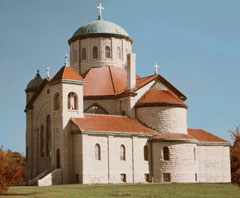 One of Iowa’s more historic churches, that was nearly destroyed by arson in 1995, could one day become a community center. The former All Saints Catholic Church in Stuart, located west of Des Moines, was built in 1908.

A group in Stuart called Project Restore has been working to renovate the building, known for it’s rare Byzantine-style architecture and 90 foot high copper dome.

Tom Small is vice president of the Project Restore Foundation. Small says the All Saints Church was once voted "the most beautiful church in Iowa" by readers of the Des Moines Register. After the fire, the Catholic Church built a new building east of town and Project Restore purchased the old structure in 1999.

The Vision Iowa Board Wednesday awarded a $545,000 Community Attraction and Tourism grant to Project Restore . Small says the grant could someday help reopen All Saints. "We want to make it into a community cultural center," Small says, "where we can have school performances, weddings, meetings, or any kind of cultural gathering. Right now, we don’t have a building for such gatherings." The Vision Iowa grant is contingent on residents of Stuart passing a bond referendum next month.

Small says the vote on November 6 is on a $1.7 million bond referendum. That amount would roughly match the CAT grant plus private donations which, so far, total $230,000. The former All Saints Church is on the National Registry of Historic Places and is an official project of the federal program "Save America’s Treasures."

Charles Willard of Des Moines was convicted of arson and carrying out a "hate crime" in the 1995 fire. He had sent letters to two bishops and a TV station claiming responsibility, prior to starting the blaze on his 60th birthday. The letters documented Willard’s hatred for the Catholic religion.