You are here: Home / Military / Obama blasts Clinton for vote on Iraq 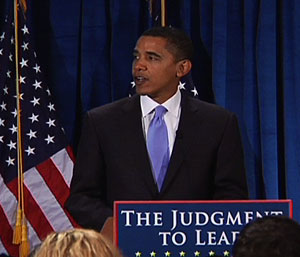 Obama also lambasted Clinton for a recent vote in favor of a resolution which Obama argues may give Bush the go-ahead to wage war with Iran.

"George Bush and Dick Cheney could use this language to justify keeping our troops in Iraq as long as they can point to a threat from Iran and because they could use this language to justify an attack on Iran as part of the on-going war in Iraq," Obama said. "I don’t want to give this president any excuse or any opening for war because as we learned with the authorization of the Iraq war, when you give this president a blank check, you can’t be surprised when he decides to cash it."

Obama accused Clinton of taking that vote declaring Iran’s Revolutionary Guard a terrorist organization to "look tough" like George Bush, who Obama calls a "cowboy." "We do need tougher diplomacy with Iran, but the way to support tough diplomacy is not to vote for reckless amendments," Obama said. "The way to support diplomacy is actually to pursue it."

Clinton’s Iowa campaign spokesman Mark Daley issued a written statement. "Once again Senator Obama has abandoned the politics of hope to engage in the same old attack politics," Daley said.  "If Senator Obama really believed that this measure gave the President a blank check for war he should have been there, speaking out, and fighting against it.  Instead he did nothing, remained totally silent, and spoke out only after the vote to engage in false attacks against Senator Clinton."

Two other presidential candidates — Democrat Joe Biden and Republican Sam Brownback — are speaking over the noon-hour today in Des Moines laying out their shared idea for fixing the problems with governance in Iraq. The two senators say the country needs to be "partitioned" into states that have a greater share of power, with a weak central government.