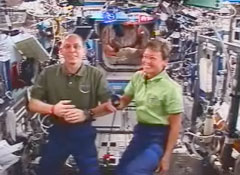 The first Iowa woman in space is back in orbit for her second assignment on the International Space Station — as she continues to set records for achievement and endurance. In an interview from 220 miles up, Beaconsfield native Peggy Whitson tells Radio Iowa she’s facing no special pressures as the space station’s first woman commander. She says, laughing, “The biggest pressure I have is answering questions from the press.”

The 47-year-old spent six months aboard the orbiting station in 2002 and says she hasn’t yet set her next goal. “I haven’t gotten that far. I really have a lot on my plate over the next six months and I’ve got those hurdles in mind right now,” Whitson says, “I think I’ll have plenty of time after that to figure out what to do. I’m hoping I can still be gainfully employed.”

Whitson’s scheduled to be back on Earth in April. By then, she’ll have set another record for the longest time any woman has been in space — a full year. Whitson is the first NASA astronaut assigned to a second mission aboard the space station. Whitson rocketed into space last week aboard a Russian Soyuz spacecraft, launched from the base in Kazakhstan. She becomes one of very few people who’ve ridden into orbit both in an American space shuttle and aboard the time-tested Soyuz, which has changed little since the Apollo era.

Whitson says she was anxious to compare the two rides, especially the lift-off. Whitson says: “I was really surprised at how gentle the Soyuz launch was. I hear the landing is going to make up for that (laughs) but the launch was very smooth. I really didn’t feel nearly the physical stress that I felt during the shuttle launch and even the shuttle launch isn’t too bad, but you do have to have sustained g’s for a lot longer period of time in the shuttle.”

The size of the Soyuz is much smaller than the U.S. shuttle — she compared her latest journey into space being the equivalent of having three guys in the front seat of a Volkswagen. Before launch last week, Whitson was presented a ceremonial whip by space officials in that barren desert nation.

“In Kazakhstan, where they ride a lot of horses and camels, a whip is a sign of power, so they gave it to me as an indication that I was going to be the commander on this station,” Whitson says, “I took it in the vein it was given me in being just a complement that I am the commander on this station. I did think it was interesting that they talked a lot about the fact that they don’t typically let women have these.” She says, giggling, she hasn’t yet had to use the whip to keep the other members of the crew in line.