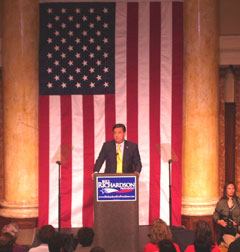 "I would not give him the kind of assistance we give him unless he does something about the safe havens of the terrorists," Richardson says. "We have too cozy of a relationship with (Pakistan President Pervez) Musharraf."

In August, Richardson criticized rival Barack Obama for arguing the U.S. should take military action inside Pakistan against terrorist enclaves there if Musharraf refuses to do so, but now Richardson is urging the Bush Administration to use its "leverage" to force Musharraf to act.

Musharraf, the general in charge of Pakistan’s Army, seized power in Pakistan during a coup in 1999 and recent balloting in Pakistan allegedly confirmed his re-election as the country’s president, but that is being challenged. "He was elected in a way that does not support legitimacy and he should have free and fair elections," Richardson says. "But he is the leader there. Pakistan is a strategic ally, but we should use our leverage on him to go after the terrorists and to become more democracy-oriented, like have an election."

Richardson, a former Ambassador to the United Nations who is now New Mexico’s governor, accuses the Bush Administration of having "cozy relationships" with dictators "all over" the Middle East. "Instead of giving assistance to developing countries on human needs, on micro-lending, on renewable energy, we’re giving US foreign aid to build palaces and to corrupt foreign dictators that are not helping us," Richardson says.

Richardson made his comments during a question-and-answer session with reporters on Thursday afternoon in Des Moines.