You are here: Home / News / ISU grad anxious to get back to earth 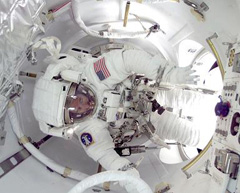 Astronaut Clay Anderson says he’s eager to come home, but hates to leave the International Space Station, where he’s been living since June. Anderson, the first Iowa State University graduate in space, is due to return to Earth early in November.

In an interview with Radio Iowa from the space station, Anderson says one of his biggest challenges has been accepting that his time there is limited and he can’t see all tasks and experiments completed. Anderson says: "I guess I would want more patience in a second go-around here. The other thing that’s really difficult for me is the separation from my wife and my kids. We have a very strong family bond. They’ve been great on the ground, very strong and very independent while I’ve been away but I’m looking forward to being back with them soon."

The 48-year-old Anderson has a wife and two young children who live in Houston. He says he’s had many amazing experiences while on board the space station and one memory he’ll always carry is when he was doing a spacewalk, or E-V-A for extra-vehicular activity.

"My first E-V-A of my whole life, I was outside and I was getting ready to start to do some work and I looked and I saw the moon coming over the horizon of the earth and it was one of the most beautiful sights that I’ve ever seen," Anderson says,"I actually just sat there and thought, ‘Holy smoke. I can’t believe that I’m doing this.’ It was pretty impressive and it left a great imprint in my mind."

Being a native of Nebraska, Anderson says he had to include a football memento in his allotment of personal gear. The fully-inflated Nebraska football carrying a big red "N" can be seen, occasionally, floating around the space station, for those who watch NASA-TV.

He says, "It wasn’t inflated when it got here. We had a very small pump that I inflated it with right after I got here and I will deflate it sometime before I leave." He’s scheduled to leave on the space shuttle Discovery during the first week in November. Discovery is due for lift-off from Florida on Tuesday (October 23rd) to begin a 14-day mission, including a stop at the space station.