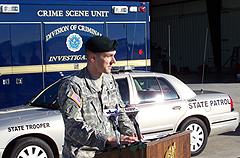 Dostal says its called the Partnership for Youth Success (PaYS) Program, and can help recruits set plans for the future. Dostal says the typical people they recruit are age 19 to 25, and he says many of them are not thinking ahead very far, but he says about 10 percent of those who come in are interested.

Dostal says they recruit about two-thousand people each year. He says this is one of several agreements they have with civilian businesses.Dostal says the Union Pacific Railroad and John Deere are a couple of other major partners for the program in Iowa.

Meyer says they screen out a lot of candidates based on their applications, but this agreement ensures that the soldiers will get a face-to-face interview for available public safety jobs. Meyer says the Public Safety Department is always looking for new people to maintain its staff.

Meyer says they run a training academy once a year, and just completed one in which 35 people graduated. He says they look for around 40 people each year to fill the retirements and other turnover. Meyer says they would also like to see staffing of the state patrol increase back the levels of 10 years ago, which would require more new people. Dostal and Meyer signed the agreement in a ceremony at the Ankeny Airport.