You are here: Home / Tax Amnesty down to one day, tax collected behind projections 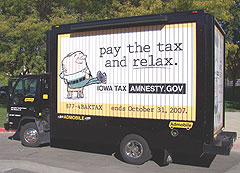 The Iowa Department of Revenue’s tax amnesty program wraps up on Wednesday, and so far the money that’s come in is far behind the 54-million dollar projection.

Stuart Vos, administrator of the department’s revenue operations division, says 3,000 people have paid some five million dollars in back taxes.

Vos says the vast majority of the people who have paid are people who already had an assessment against them, paying from 25 dollars to 10 or 20 thousand dollars. The amnesty period that began in September, offers to cut half the interest and the penalty as an incentive for those who owe to pay up.

Vos says they will need to do some analysis on the money that was brought in to determine how much of this is new money, and how much they would have collected anyway. Vos says tax collections had already been running ahead of normal, thanks to better analysis of the tax situation.

Vos says they put a new computer program called "Tax Gap" into effect in 2000 that is designed to identify people who are underpaying or not paying their taxes. He says that program has helped them make great strides in collecting taxes. Vos says they’v also put more people on the job.