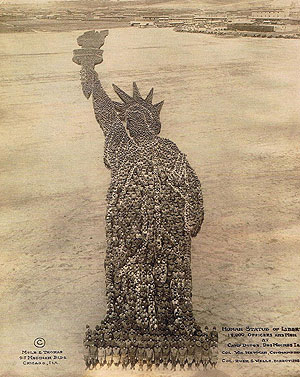 For whatever reason, an 89 year old photo taken in Iowa is making its way around the internet. Many people who see the picture find it hard to believe it’s real.

Vogt says, in fact, it’s a real photo called "The Human Statue of Liberty." The photo was taken in August 1918 by Arthur Mole.

Vogt says Mole and another photographer, John D. Thomas, traveled the country taking photos of soldiers who were grouped together to form various "patriotic" patterns. Over 18,000 soldiers were used in the Camp Dodge photo that was taken from an 80 foot high tower. Mole and Thomas went to great lengths to make sure the human statue was proportionally correct.

"It’s an interesting exercise in survey and mathematic techniques to have the photographer perched in an 80 foot high tower and have all the soldiers fall in exactly where they needed to be," Vogt says. In order to give the statue proper perspective, 12,000 men were placed 1,300 feet away from the tower to make up the flame of the torch. Only 2,000 men were needed for the body and head – closer to the tower.

Vogt says that means there were too many men, too far away, for the photographer to direct, "everyone needed to know exactly where to fall in when they posed for that picture." The photo was taken not long before the soldiers were shipped out to France for World War I. The Gold Star Military Museum has three original prints of the picture.