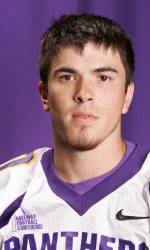 On October 30th, police were dispatched to a local pharmacy on the report of someone obtaining Hydrocodone using fraudulent prescriptions, which apparently had been taken illegally from a local doctor’s office.  Hydrocodone is sold under the name Viocodine, and is a pain killer.

Investigators questioned Parsons, and police say he admitted to passing the prescriptions. On November 1st, UNI athletic officials announced that Parsons had been dismissed from the football squad, saying he violated team rules.

The senior from Moore, Oklahoma, started the first eight games at safety for the Panthers, recording 29 tackles and three interceptions. If found guilty, he faces up to 10 years in prison and a possible $10,000 fine.