You are here: Home / Politics / Govt / Clinton, Obama spar over issue of experience 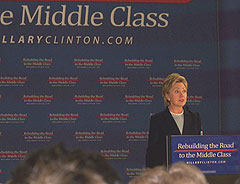 Democratic presidential candidate Hillary Clinton was in Knoxville this morning to attack the Bush-era economic record and present herself as the only experienced alternative to right the nation’s economic ship.

"The next president will inherit, unfortunately, a lot of problems. Now this is kind of a familiar situation for me because when my husband became president he inherited a lot of economic problems," Clinton said. "As someone said the other day, there seems to be a pattern here. It takes a Clinton to clean up after a Bush."

Clinton lamented the staggering national debt, problems in the mortgage industry and risky investments that have too little government oversight and she suggested there won’t be any time to waste in curing the nation’s economic ills. "More than ever before workers will need good job training for the jobs of this new century, but there is one job we can’t afford on-the-job training for — that is the job of our next president. That could be the costliest job training in history," Clinton said. "Every day spent learning the ropes is another day of rising costs, mounting deficits and growing anxiety for our families and they cannot afford to keep waiting."

During a news conference in Fort Dodge this morning, Barrack Obama dismissed the suggestion Clinton has any more experience than he does.  "I am happy to compare my experiences to hers when it comes to the economy. My understanding is that she wasn’t treasury secretary in the Clinton Administration," Obama said. "…I don’t know exactly what experiences she’s claiming but rather than just assert experience, if she has specific differences with me with respect to economic policy I’m happy to have those debates, but just this sort of general notion of experience based on longevity in Washington I don’t think is sufficient to make the case to the voters of Iowa or the American people."

There are five presidential candidates in Iowa today, including Obama and Clinton. "I’ll be all over the state today and tomorrow and then I think we’re all going to give you a break for Thanksgiving. Don’t you all think that’s a good idea?" Clinton asked the crowd in Knoxville. "…Then we’ll be back over the weekend, traveling the state, meeting as many Iowans as I possibly can."