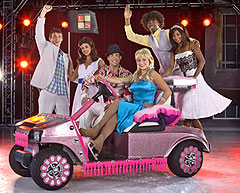 "Grease" may’ve been the word of the last generation, but "High School Musical" is tops today, especially with girls under 18. Chicago native Lane Walker is playing the role of Gabriella in the ice show version and considers herself a figure skater first, who also sings and acts.

Walker is 22 and has been ice skating competitively since she was seven. She says she didn’t have to work to memorize any of the songs from the hit film before taking the job. Walker worked as an ice skating coach before being hired on the tour and says: "A lot of my students that I taught would bring me music from the movie to skate to, so I would choreograph programs and routines for them to skate to with this music. It kinda’ grew on me and then sure enough, now here I am, skating to it in the ice show."

She says she shares a lot in common with the character she’s playing. Walker says Gabriella accepts everyone and sums up the movie’s theme of: "Be true to who you are and don’t let anybody tell you differently." She says the show has fans of all ages, given the wild popularity of the film.

When the sequel, "High School Musical 2" came out on the Disney Channel earlier this year, it reportedly pulled the highest ratings for any cable T-V show in history. The ice edition features eight shows and runs through Sunday at the Iowa Events Center in Des Moines.