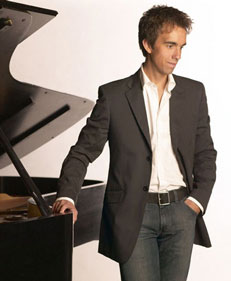 A piano player from eastern Iowa who launches his sixth annual tour on Saturday admits he almost tossed his whole musical career for something significantly more stressful. Listening to the melodies of Jim McDonough , it’s hard to imagine his previous profession was air traffic controller.

After graduating from Wartburg College in Waverly, the Monticello native became a high school band director, but then went back to school to learn how to run the runways and airways. After a few years of that, McDonough took a full month off to play piano on a cruise ship.

"My job was to take people’s requests and play their favorite songs," he says, "going from air traffic control to the Caribbean felt like going from the most stressful job in the world, literally, to the least stressful. I just knew that was a better fit for me."

As he does every year, McDonough is opening the holiday tour in Monticello. The 33-year-old says when the series of concerts first kicked off, it began in Monticello "and it was just me and a piano playing for my hometown crowd and it’s grown, certainly." McDonough has now released his 8th C-D and has sold more than 100,000 copies nationwide.

He says his music is in about 800 stores, gift and specialty shops, and hospital gift shops. Of the eight CDs, two are focused on the holidays while the other six are non-seasonal. His Christmas concert tour features a 16-piece orchestra, dancers and singers. The tour is playing in: Monticello, Dubuque, Cedar Rapids, Cedar Falls and Des Moines.