You are here: Home / Crime / Courts / Ameriquest settlement checks in the mail 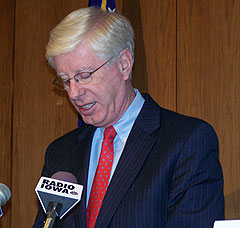 Iowa Attorney General Tom Miller says checks are going out today and tomorrow to some 3,000 Iowans as part of the Ameriquest mortgage company settlement. Miller says the checks will total just over two-point-six million dollars.

Miller says Iowans should recognize this is not junk mail, with the average check worth 884 dollars, and the checks ranging from 159 dollars to nearly $3,400. Miller says the Ameriquest settlement announced last year was the largest in the state’s history.

Miller says there were multiple issues in the case, with the main issue the culture of "sell, sell, sell, do whatever it takes to sell, including misleading consumers." Miller says the high pressure sales tactics created mortgages that were not very good for most consumers. He says the settlement ensures the company won’t continue the practice.

Miller says this was a good resolution and the company has changed the way it does business. He says company sales declined dramatically once the settlement was announced, and the company no longer makes loans through their branch offices. Miller says Iowa’s agreement with Ameriquest was part of a 325 million dollar nationwide settlement.