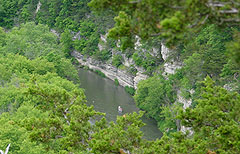 A $3 million dollar grant has helped launch a massive land-preservation campaign in Iowa. The Iowa Natural Heritage Foundation is hoping to protect 15,000 acres of land.

O’Gara says they’re targeting the habitat around several natural great lakes in the state, but primarily the area around Okoboji and Clear Lake. "These regions are under a lot of threat for loss of habitat," O’Gara says, "lots of second homes are being built, lots of fragmentation and breaking up into smaller ownership parcels, different management…that can all affect wildlife negatively."

The foundation hopes to collect around two-thirds of the needed funding from public resources, such as grants. At least $4 million will be needed in private donations. O’Gara says, "We’re finding a lot of interest among people who have a sense that they want to protect what’s left in these regions while they can. We do feel like it’s kind of a race to make sure we can protect what can be protected and held whole while there’s still a chance to do so."

The $3 million grant is from the Doris Duke Charitable Foundation, which works to protect wildlife areas around the U.S.