You are here: Home / Politics / Govt / Giuliani says he’s "going to do fine" in Iowa Caucuses 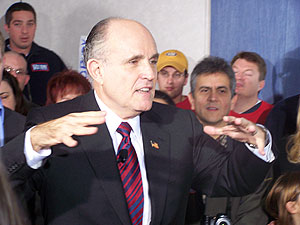 Republican presidential candidate Rudy Giuliani is stressing "attitude" in the closing days of the campaign here in Iowa.

"We have some big problems. We may even have some crises we have to face but this is about as well as human beings have ever been able to do it and we are the luckiest people on earth to be Americans and to have the ability to forge a future that is without limits," Giuliani said this morning in Des Moines. "…It’s all a question of attitude. It’s up to us and it’s up to strong, vigorous leadership that gets that from the American people, that harnesses that rather than decisions that get in the way of it and stiffle that kind of attitude."

Giuliani spoke Saturday morning to supporters crammed into his Iowa campaign headquarters. "2008’s going to be a great year…and the first 20, 35 days of the year are going be something like 29 primaries and caucuses, so it’s going to happen swift, fast and I believe we’re going to win and we’re going to win…with your help and your support," Giuliani told the crowd.

Giuliani grumbled about surveys which find a majority of Americans think the country’s headed in the wrong direction. "People with their heads down, people thinking America is not going to be as great in the future as it was in the past," Giuliani said. "That’s all about our decisions, I mean we get to decide if America is greater in the future or not based on the decisions that we make, the people we elect, the policies we put into effect."

As he has in the past, Giuliani stressed his "executive experience" as mayor of New York City and he mentioned the September 11th attacks five times during his 15 minute speech. Yet Giuliani’s main message was more upbeat than sober.

Giuliani has not spent as much time campaigning in Iowa as some of his other GOP competitors and this will be his final trip to the state before the January 3rd Caucuses. Giuliani told reporters he is "going to do fine" in Iowa.