You are here: Home / Politics / Govt / Romney says he won silver, now will go for gold 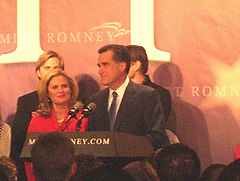 Former Massachusetts Governor Mitt Romney finished second on the Republican side. Flanked by some of the athletes who won medals at the Olympics he helped manage, spoke with supporters at a suburban Des Moines hotel.

“Well we won the silver,” Romney said, “and congratulations to governor Huckabee for winning the gold, nice job.” Romney says just because you win the silver in one event, it doesn’t mean you’re not gold in the final event. Romney says thanked Iowans for helping his campaign.

Romney says he talked with his wife Ann as they came down to meet supporters and talked about what it was like first coming to Iowa and not knowing anyone, “And now we know thousands of people in this state, who have warmed our hearts, have welcomed us into their homes, have talked to their friends and neighbors about us, have campaigned for us and made calls for us, thousands and thousands of calls.” Romney says they will use their experience in Iowa to go on an win the nomination.

Romney says, “You have so inspired us, you so moved us, we will always remember our dear friends here in Iowa, and I’m planning on coming back in the general election, when we take on whoever it is the Democrats nominate and beat ’em.”