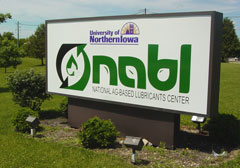 Honary says the significance in this is that federal programs are investing "real dollars" in research to petroleum alternatives as part of a national strategy. Honary says their previous work focused mainly on industrial products, such as grease and lubricants. The new focus has them looking at products that would be used in a wider market.

He says they added the capability to test and certify biodiesel and ethanol, and they are now looking at using vegetable oil as engine oil or transmission fluid in cars. Honary says the expanded commitment by the country to find renewable alternatives made the research into car products possible.

Honary says they didn’t think that vegetable oils would be used as engine oil in autos, because the vegetable oil would have to go through a lot of preparation for that use. But Honary says since they expanded to become a national lab, they’re now looking at the automotive uses for vegetable oil as well. Honary is pleased to see over a decade of work in making alternative lubricants out of soybeans be part of a surge in the price of the commodity.

He says when they started in 1991, soybean prices were 12 and 14-cents-a-pound and the goal was to find alternative uses beyond food to get the soybean prices up. Now Honary says he has seen prices move up to 36-cents-a-pound, then drop and stay around 20 cents, but the price recently hit 51-cents-a-pound, which Honary calls "incredible." The success of increasing the cost of soybeans has made the center’s research a little bit of a victim of its own success.

Honary says the increased cost of soybeans makes the job of commercializing the products a little more difficult, but he says its the result they were looking for. Honary says the higher prices make them focus on more efficient ways to make the products. The center is located in Waverly, just to the north of Cedar Falls. For more information, visit the NABL website .