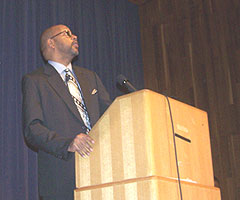 Miami Herald writer Leonard Pitts, Junior reminded a couple hundred people, gathered at the Iowa Historical Building in Des Moines, that Dr. King fought for the rights of all humans, not just blacks.

Pitts said racial inequity still clearly exists in this country, stating "we have come so far, yet we still have so far to go." "Which is why it is imperative to return to the man who got us this far," Pitts explained, "to drop the cardboard cutout, to exchange the image for the inspiration, to understand what he did and how he did it – so that we can take the lesson of his example and use it to change our lives in the here and now."

Pitts invoked words from one of King’s final speeches in his closing remarks. "If you know who Martin Luther King was…who he is, then you know what you need to go out of here and do. Get together…come together and let us beat the drum for a righteous cause," Pitts said to a standing ovation.