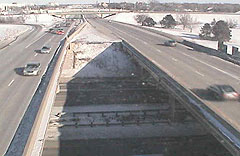 A new report concludes 21% of the state-owned bridges in Iowa are "structurally deficient." Carolyn Bonifas of The Road Information Program is the report’s author.

"Iowa has the fourth-highest rate in the nation of structurally-deficient bridges with more than one-fifth of the state’s bridges in need of immediate repair or replacement because of deterioration," she says. "…However, it’s important to note that these bridges are not unsafe. In fact, they’re inspected regularly and thoroughly and are closed or posted for lower-weight vehicles if any problems are detected."

Bonifas ranked Iowa’s top 100 troubled bridges and she says the Highway 30 bridge in Tama County is in the worst shape. According to Bonifas, six percent of the state-owned-and-maintained bridges in Iowa are "functionally obsolete." "These are bridges that not longer meet current safety or design standards and often don’t have adequate lane widths or shoulder widths or aren’t able to accommmodate the amount of traffic that they’re forced to carry," she says.

The report did not review the 90 percent of bridges in Iowa which are owned and maintained by cities and counties. Iowa Good Roads executive director David Scott is among those pressuring lawmakers to increase the state gas tax to raise more money for roads and bridges. "It’s time to quit studying it and time to start fixing it," Scott says. "I hope now that the legislature has, indeed, all the information they could possibly ask for to address these needs."

Larry Winum, a Glenwood banker, is a member of the Iowa Bankers Association, the Iowa Independent Bankers Association and an economic development group known as the Southwest Iowa Coalition. Winum says all agree that lawmakers need to do the "un-banker-like" thing and raise the gas tax or fees to help fix up roads and bridges.

"If we can’t find the money for that, then I don’t what we’re going to do about economic development," Winum says. "Road are important for economic development." Bob Singer of the Fort Dodge Chamber of Commerce says the ethanol plants that’ve sprung up in Iowa are putting new strain on the state’s transportation system.

"The infrastructure is going to be pressured more and more, not only our roads but our bridges as well," he says. Senator Tom Reilly, a Democrat from Oskaloosa, predicts legislators will take some steps this year to boost the amount of money in the state’s road fund, primarily though increased licensing fees on new vehicles.

"We have serious issues that require serious, long-term, bipartisan responses by all of us," Reilly says. Reilly acknowledges, however, that lawmakers aren’t likely to raise the state gas tax as Governor Culver has said now is not the time to hike that tax when gas prices are so high. You may find the report on Iowa bridges on-line at www.tripnet.org.