You are here: Home / Outdoors / Donation of land allows the expansion of Stone State Park 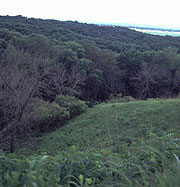 Thanks to the acquisition of valuable land from two families, a state park in northwest Iowa that includes part of the scenic Loess Hills is expanding this month. Stone State Park in Sioux City is growing by about 160 acres.

Brian Fankhauser, a land stewardship specialist at the Iowa Natural Heritage Foundation, says the additions will further enhance an already-beautiful area. Fankhauser says the Thurow property has a lot of prairie remnants and will expand the park’s prairie diversity, while the Sloan property is more woodland and is the last large tract of undeveloped land to the south that could be added to the park. He calls it “a significant piece for the park.”

Fankhauser says the Iowa D.N.R. owns and manages the park and it’ll be up to that agency to determine exactly how best to utilize the new areas. He says they’re hoping to run several undeveloped walking trails through the new properties so the public can get out and enjoy the natural areas — for hiking and viewing wildlife. The park is nationally recognized as an Urban Wildlife Sanctuary and is home to wild turkeys, white-tailed deer, coyotes and red foxes.

Fankhauser says the park is also known for its panoramic views and bur oak trees in addition to several rare butterfly species and blooming yucca plants which dot the landscape. He says: “It’s all related to the Loess Hills landform, which because of its geology and its really dry soils and its steep aspects, you get species that you normally don’t find except for several hundred miles to the west. That’s why it’s pretty important to protect these areas and expand on the park.”

With the additions, the park will include just over 1,100 acres of land. The Iowa Natural Heritage Foundation, a non-profit conservation group, acquired 98-acres from Norman and Carolyn Sloan and 62-acres from Alfred Thurow, all of Sioux City. The land is being transferred from the foundation to the D-N-R late this month.