You are here: Home / Marion gets win in first tourney appearance 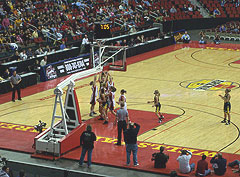 In its first ever appearance at the tournament Marion came away with a victory. The Indians used a smothering defense and a 31-17 rebounding advantage to roll past Spencer 47-31.

Paige says it was a complete effort. Paige says they’ve been though a lot of struggles and have been up and down, but today they came out and weren’t afraid, and played hard and "just played ball."