You are here: Home / Linn-Mar gives Roosevelt a rough second half to win 66-38 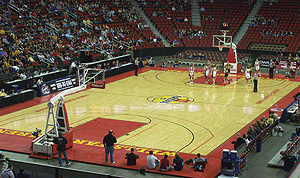 The Class 4A quarterfinal round highlights today’s action at the girl’s state basketball tournament.

After nine lead changes in the opening half Linn-Mar broke it open in the third quarter against Des Moines Roosevelt.

The Lions used a 21-4 run to take command in a 66-38 victory. Jamie Printy led Linn-Mar with 17 points, while Jaye Hutcheson added 15 points, including three-of-four from three point range. She says in the first half they didn’t attack as much and didn’t shoot many free throws, and in the second half they started driving in and got 16 free throws.

Hutcheson says it was a satisfying victory after they lost to Roosevelt in the opening round two years ago. She says it felt so good to win after knowing what it felt like to be on the other side and losing.

Senior center Emma Van Winkle had nine points for the Roughriders and also grabbed 11 rebounds and blocked six shots. She says Lin Mar stepped up and made some shots and her team got a little down on themselves. “They’re a very good team and they played very well,” she says.

It was Roosevelt’s third straight appearance at state. They won the title in 2006 and finished second a year ago. Van Winkle says she’d rather be playing in the championship, but she says getting back to the tournament was big as everyone thought they wouldn’t make it back. The Roughriders finished the game with 25 turnovers and made just 6-of-22 shots in the second half.