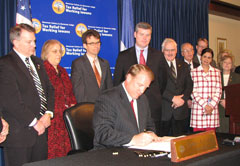 Iowans who receive those “stimulus payments” from the federal government won’t have to pay state income taxes on the check.

Over two dozen legislators and other dignitaries crowded around Governor Chet Culver this afternoon (Wednesday) as he signed a bill which made that state tax policy.

“Simply put this means more than $67 million in tax relief to over one million Iowa taxpayers,” Culver said. The federal economic stimulus payments will be made to most Americans who earn less than $75,000 annually or couples that earn less than $150,000 a year.

Iowa officials have taken steps to ensure veterans who live at the Veteran’s Home in Marshalltown won’t see their veterans benefits cut when they get their “stimulus” check. “This means when veterans and their families apply for needed services, they will not be penalized,” Culver said.

Click on the audio link below to listen to Culver’s remarks at the bill signing ceremony.

All 100 members of the Iowa House approved the tax changes and the proposal passed the Senate on a 48-0 vote before it landed on Culver’s desk for his approval.