You are here: Home / Politics / Govt / Fallon strikes back at Boswell charges 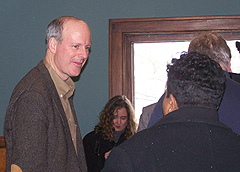 Democratic congressional candidate Ed Fallon held a news conference this morning to strike back at allegations that the political consulting business he created in 2006 is merely a "shadow organization" to gather an income for Fallon.

Fallon’s congressional campaign manager also manages his consulting firm and Fallon said he has no immediate intention of making public the names of the individuals who’ve written checks to the firm.

"When we set it up we never expected to have to, you know, tell the world who was donating. I have a feeling that most people wouldn’t care, but we haven’t asked them and I don’t have time to go back and do that to all the folks who’ve donated right now," Fallon said. "If, at some point, that’s something that the supporters of that initiative want to go public with, that’s fine, but I can’t do that without talking with them about it."

Fallon is challenging Congressman Leonard Boswell is the June primary. Boswell campaign spokesman Mark Daley says Fallon "talks about clean elections," but Daley is accusing Fallon of running a "shadow organization" to get around laws requiring disclosure of donors to nonprofit groups.

Fallon told reporters he opted for a partnership rather than a nonprofit in order to be free to address a "much broader range" of political issues. "The nice thing about a nonprofit is you can accept tax-deductible donations," Fallon said, "but the bad thing about a nonprofit is it really, really ties your hands in terms of the paperwork you’ve got to do, the board and bylaw and article structure you’ve got to put in place and the limitations to which you can really engage in anything relevant to politics, even something as basic as advocacy."

Fallon, in turn, accuses the Boswell campaign of attacking his political work because it’s his strength and Boswell’s weakness. "I think one mistake that politicians sometimes make is they get attacked and they think, ‘Well, that’s silly. I’ll just let that go. Nobody believes that’ and that happened to me during the campaign for governor. I was attacked in Iowa City on some of my strengths and I didn’t respond because they were so absurd and I wound up losing Johnson County because of that," Fallon said. "I’m not going to let that happen again."

Fallon said he held a news conference at his Des Moines campaign headquarters to make his points clearly and publicly. "I think that Congressman Boswell is trying to discredit me on something that is groundless, but again, he’s coming at me on my strength and his weakness — the same thing that Republicans did to John Kerry," Fallon told reporters, citing the G.O.P. attacks which questioned Kerry’s war record when Kerry faced off against President Bush in 2004.

Fallon and Boswell are both from Des Moines and both are seeking to represent Iowa’s third district in congress in 2009 and 2010.

Click on the audio link below to listen to Fallon’s news conference.