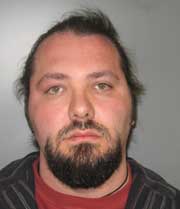 A south-central Iowa man is accused of taking photos of a naked 14-year-old girl in exchange for alcohol. Police have charged 33-year-old William Mendenhall of Knoxville with sexual exploitation of a minor. Knoxville

Police Chief Dan Losada says the investigation began after the girl’s mother found one of the photos.

Losada says the woman learned that Mendenhall took the photo in exchange for the girl receiving alcohol and/or tobacco. Police then searched Mendenhall’s home and found more nude photos.

"We found a large number of images of naked women. We’re talking in excess of 200 discs with images on them. Some of models may be of age, but some may or may not be," Losada said. Police are now working to identify the girls or women in the photos.

Many of the individuals are believed to be from the Knoxville area. Losada is urging parents to talk to their children about inappropriate photos. "Make sure they understand that anyone taking photos of them in states of undress is inappropriate, whether they be boyfriends, girlfriends, strangers, friends, anything. If during these conversations, they determine that maybe some photos have been taken of their children, we ask they contact local law enforcement authorities," Losada said.

Knoxville police are now working with Federal authorities on the case. Mendenhall was released from custody after posting bond.