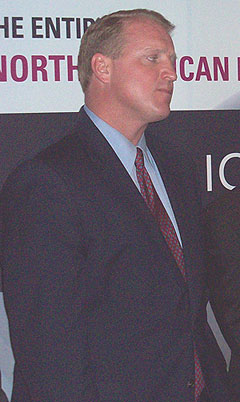 State officials say over 36,000 Iowans lost a total of 138,000 pounds in the past four months as part of the "Lighten Up, Iowa" challenge.

Iowa Sports Foundation executive director Jim Hallihan is an organizer and co-founder of the "Lighten Up" program. "If you could picture 69 female beluga whales…that’s about the amount of weight that we lost," Hallihan says. "…That’s about 46 grand champion bulls at the State Fair. That stuff is gone."

In January, Iowa’s governor and lieutenant governor issued a challenge, urging state employees to participate and about two-thousand did. Both pledged to get involved, too.

Governor Chet Culver has slimmed down, but isn’t revealing his weight loss, just the amount of activity he’s logged in the past 100 days. "I was able to get in 60 workouts for 70 hours," Culver announced at a ceremony in the statehouse this afternoon. "Although it didn’t count, I was up this morning at five and got my exercise today."

Lieutenant Governor Patty Judge also began working out and altered her diet.  Judge says she tried "very, very hard" and lost 15 pounds. "For the first time in a long, long time I am incorporating physical activity in my daily routines. They’ve even had me at a gym with a personal trainer…who’s continues to try to convince me that doing situps at over 60 (years of age) is a good idea," Judge says. "(I’ve) got a ways to go until we’re real comfortable with that, but I am trying."

Judge says she’s not at the end of her weight-loss journey, though, and she’s praising other Iowans who embarked on the "Lighten Up" challenge this year. "With your help, we are changing the shape of the state — and I think the shape is better — one individual at a time," Judge says.

"Lighten Up, Iowa" was launched in 2000 and this year’s weight-loss total was the highest ever for the on-line competition.

In another month, the state will launch another challenge to Iowans. "The Culver/Judge 100 Way Challenge — that’s W-A-Y," Culver says. "Our challenge to all Iowans has two parts. Number one: we must build on the progress we’ve made together through the ‘Lighten Up, Iowa’ program by encouraging Iowans to stay active in their daily lives. Number two: we can do so by promoting the unlimited opportunities for outdoor recreation in our state."

Culver says Iowa’s land, lakes, rivers and streams are an "amazing" resource for activities in the summer months. "Whether it’s taking part in RAGBRAI, turning off the television and going for a walk or just deciding to eat better — every Iowan can take charge of their own health, prevention and wellness," Culver says.

The Iowa Department of Public Health plans to set up a website where Iowans can tally their outdoor activities, starting on June 1st. In September, Iowans who’ve logged the most outdoor activities will be publicly recognized. The governor says he plans to take part in the effort and will participate in the Hy-Vee Triathlon.