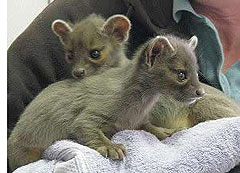 They look like cats. They act like cats, but they’re far from felines. Two baby fossa were born in the Henry Doorly Zoo several weeks ago and they are now on display in the Omaha facility’s nursery.

Olsen says, "Their ankles can actually rotate 180-degrees, which allows them to grip a tree branch as they’re climbing down face first." She says a fossa isn’t something you see every day, in fact, most people have never seen one.

She says: "These guys are really pretty rare in zoos. There’s fewer than 20 institutions in the United States that have fossa and that means there are less than 50 animals." Olsen says people mistake them often for a rare type of cat.

Olsen says, "Originally, they were thought to be cats and they have a lot of cat behaviors, but, primarily, they are more closely related to a mongoose or a weasel." Fossa are native to the island of Madagascar, off the southeastern coast of Africa.