You are here: Home / Health / Medicine / Iowa teen to be recognized for anti-tobacco efforts 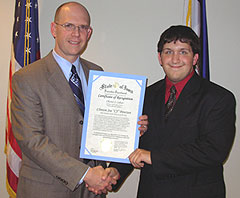 An Iowa teenager will be recognized this week in Washington D.C. for his work on anti-tobacco campaigns in the state.

Seventeen year old C.J. Petersen of Atlantic has been named the 2008 National Youth Advocate of the Year by the Campaign for Tobacco-Free Kids. Petersen says he wanted to do something to educate others about the dangers of smoking after his grandfather died of lung cancer.

"That was just a very emotional point in my life, I was in 8th grade. I was looking for someway to memorialize him and then we had a tobacco presentation at my school. I learned about JEL and got involved," Petersen said. Since then, Petersen has founded three Just Eliminate Lies (JEL) chapters in Des Moines and Atlantic. He says his motivation also stems from the tobacco industry’s marketing practices, which he believes target children.

"When the industry manipulates children, that’s where we need to draw a line as a country," Petersen said. The soon-to-be high school graduate is credited with helping pass tobacco-free campus policies in three Iowa school districts and he spent time lobbying state lawmakers on anti-tobacco legislation.

Petersen says he didn’t accomplish all of his goals, but he’s proud of his work on anti-tobacco efforts in the state. "It’s really hard to let go of my local chapter of JEL obviously, because it’s something that I started and something that has been very important in my life," Petersen said. Petersen plans to attend Wartburg College next year and study communications, public health and political science.

"I’d really like to get involved in policy and politics…perhaps run for office someday," Petersen said. He will be presented with the National Youth Advocate of the Year award at a ceremony tomorrow night. Petersen is the second Iowan to receive the award. Kassie Hobbs from Bettendorf was selected for the award in 2005. Over the next year, Petersen will serve as a national spokesperson for the Campaign for Tobacco-Free Kids.