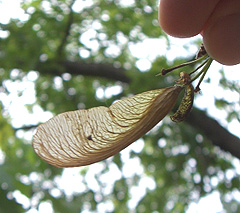 "Last year we had the cold snap in late February, I believe it was, and that almost totally destroyed the seed crop last year and a lot of times then trees will react by overproducing, I guess we could say, in the subsequent year and that certainly seems to be happening," he says. "The maple trees have already put on a very substantial production of seed and now the cottonwood." 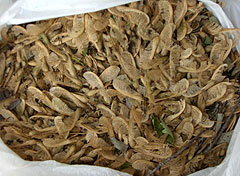 Maple trees produce seeds that are carried aloft on what seem like paper wings, sometimes called whirligigs or helicopters.

The cottonwood tree produces seeds that are literally carried on the wind by pure cotton. "Same as material is made from, but much shorter fibers and much smaller aggregation around each seed than the cotton plant has," Hall says.

Cottonwoods, sometimes called poplar trees, come in male and female form. It is the female cottonwood tree that produces the cotton that’s flying through the air this spring. Some cities have ordinances which forbid planting female cottonwoods.

Hall has conducted research, financed by the U.S. Energy Department, to see if cottonwoods could be grown quickly, cut down and converted into biofuel. "That’s what we’re still working on is developing something that could be grown as a crop," Hall says. "…so we tend, when possible, to select for males that won’t create the problems of having all that seed in the air."

Hall has grown cottonwoods that reached 60 feet in height within eight years, when they’d be harvested and ground down to produce biofuel. New trees often sprout from the stumps and those would be harvested in four or five years.