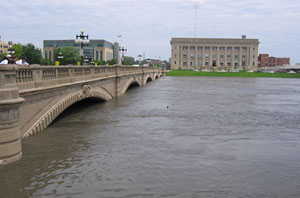 Iowa’s capitol city has thus far been able to avoid the major flooding in the downtown area that was seen in 1993. Water released from the Saylorville Reservoir reached Des Moines around noon, and Des Moines Public Works Director Bill Stowe says the floodwalls held.

Stowe says their risk assessment shows the levee system will continue to contain the flood waters. Stowe credits the improvements made after the floods of 1993 for holding out the latest floodwaters. He says there was some minor flooding in the Court Avenue area of downtown, brought on by new rain.

Stowe says the stormwater system has been overburdened since last week, and when new water comes it, it seeks the lowest elevation, and that’s what happened on Court Avenue. The water later drained away as the sewer system caught up. Stowe says the forecast for heavy rains will continue to cause concern about localized flooding, and any water north of the city could lead to more problems.

"All of Des Moines certainly should be at a high level of concern, whether it’s the downtown areas, or any area of Des Moines," Stowe says, "there’s basement flooding that’s caused by groundwater, there’s these localized floodings that’s really caused by the collection system itself, and certainly there are concerns about the river level." Stowe says everyone needs to keep track of any new weather developments.

Stowe says each individual needs to look at their situation in deciding how to deal with flood concerns. "I’m staying in Des Moines, I urge you and others to go through the process of their own risk assessment. Certainly there’s more risk in Des Moines now than there was two weeks ago," Stowe says. Forecasts says Des Moines and the Des Moines and Racoon River basins could get three to four-and-a-half inches of rain.