You are here: Home / Fires/Accidents/Disasters / Some Cedar Rapids residents getting a look at flooded homes 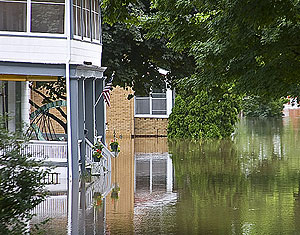 A number of Cedar Rapids residents were allowed access to their flooded homes Tuesday as city inspection teams surveyed the structures to determine if they are safe.

Panzigraw taped a red sign to the door that says "unsafe structure." The residents will have to pump out the water so it can be inspected again. Panzigraw says the ones that have foundation issues will need more structural estimates done on them and be removed or completely rebuilt. A lot of the older areas have mortar or limestone blocks for their basements. He says they are 80 to 100 years old, and the mortar is now bad and caving in.

At the home next door, Tami Pahl was given the O-K by Inspectors to enter the residence. Pahl says you can watch the news coverage of the damage on TV — but until you step into your own home — it’s unimaginable.

Pahl says she doesn’t know where to start, as she just wants to get the important things out. "I’m just happy to be alive, I mean..I didn’t lose my dog, I didn’t lose my kids, I didn’t lose my husband, but I basically lost everything else," Pahl says. Some people are talking about moving away, but not Pahl.

She says it’s a family neighborhood where everyone cares about each other and her kids grew up here. "I don’t want to leave my home," she explains. Across the street Jack and Char Gillick we’re trying to determining what — if anything — is salvageable from their antique collections.

Char says she has 3,000 decks of cards she had collected and her husband had all types of memorabilia from Cedar Rapids. Jack was trying salvage pieces of sheet music he says dates back to the 1800’s. Char doesn’t know if much of their collection they can save.

Char says she doesn’t think much will be saved, and now they can’t get into the garage. Char’s not sure if they’ll be able to stay in the home or the neighborhood. She says her husband thinks they can, but Char says they’d probably have to tear the house down and build a new one, "and I don’t know how we’re going to do that at our age."

A pump continued working to get water out of the Gillick’s basement as they continued carrying out items onto the lawn to see they could be salvaged.