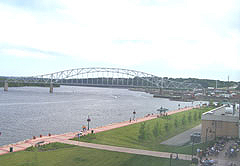 At a time when flooding rivers have caused billions of dollars damage in Iowa, an Iowa river town is winning national praise for its ability to capitalize on its neighboring waterway.

Dubuque Mayor Roy Buol  is in Miami this week for the United States Conference of Mayors, where Dubuque won a major accolade.

Buol says it was a big honor and very exciting to be selected for the Small Cities Livability Award, based on the Dubuque’s “America’s River” project. He says the award is for leadership and achievement for development of programs that enhance the livability of America’s cities. It was awarded based on the recommendation of a panel of former mayors.

Buol says the expansive America’s River effort has encompassed several years and has invigorated and revitalized Dubuque’s riverfront. “It was a 188-million dollar project, phase one of it, that took a brown field area and redeveloped that into what is really a big draw for the city of Dubuque,” Buol says.

The project includes a 60-million dollar museum and aquarium, a river walk, a hotel and water park, and a 30-million dollar conference and education center. Mayor Buol says the recent flooding that has so devastated much of Iowa had little impact on his city.

“We are very fortunate that our city leaders back in the late 60s and early 70s built the floodwall along the Mississippi. That pretty much eliminated flooding from the Mississippi River (for Dubuque). The only issue that we have now is with major rain events, storm water issues, and we’re aggressively addressing those,” Buol explains.

The conference opened Friday and is being attended by some 300 mayors from across the U.S. Buol is due home on Wednesday. The list of speakers at the conference is highlighted by former President Bill Clinton and presumed Democratic nominee Barack Obama. The mayors will vote on a host of policy issues and forward recommendations to Congress and the new administration — on subjects including: gas prices, the foreclosure crisis, climate protection, high school dropout rate and violent crime rates.