You are here: Home / Agriculture / Northey warns some farmers may not survive financially 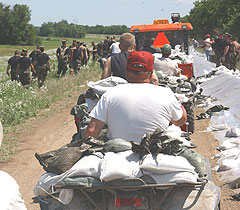 Iowa Secretary of Agriculture Bill Northey says a “significant amount” of Iowa’s corn and soybean fields have been inundated with flood waters.

“Right now we have about 10 percent of corn that’s either been flooded out or not planted and about 20 percent of our beans,” Northey says.

Some farmers are replanting their fields, if the ground is dry enough. Another complicating factor is the debris left in some fields from tornadoes and flood waters, as that must be cleared away before tractors and other farm equipment can traverse the field.

Northey says it’s hard to know what sort of harvest there will be in Iowa this fall, as there so much growing season left. “Right now we have some tough looking crops in lots of places,” Northey says. “Actually some of the beneficiaries of this will be farmers with good crops — all their crops — in other states. Right now lots of Iowa has problems.”

Northey warns some elevators and other agribusinesses, like grain processors, are suffering, as their insurance does not cover flood damage. “So we’re seeing loss in some of those facilities,” Northey says. “We’re hearing of grain bins whether they’re at a processing facility or on a farm, where that corn or those soybeans are still in the bin. Water gets in there. It swells. It can break the sides of those bins open.”

According to Northey, some farmers and agribusinesses may not be able to survive, financially. “You look at a flooding situation, not only is the house gone but the whole rest of the buildings on that farmstead are gone, in many cases with no insurance at all,” Northey says.

Northey says 2008 been an emotional roller coaster for many Iowa farmers. “This which..had the promise of being maybe one of their best years, ever, farming — they just want to survive,” Northey says.

Northey made his comments this weekend during an appearance on Iowa Public Television.